CHOOSE YOUR PREFERRED SITE BELOW TO SEE LOCAL THEATER LISTINGS AND SHOWTIMES.

Search for nearby theaters

THEY THOUGHT WE’D NEVER FIND OUT. THEY WERE WRONG.

"Highly respected Dinesh D'Souza, working together with Catherine Engelbrecht of True the Vote, just released a trailer to their new movie, "2,000 Mules," that shows the world exactly how the 2020 Presidential Election was Rigged and Stolen. The movie exposes the lies of the Democrats, RINOs, and Fake News who say it was the "most secure election in history." It was, perhaps, the least secure in history. The ballot box was stuffed, and stuffed like never before—and it's all on video. Ballots were trafficked and sold in a massive operation in each Swing State. The evidence is so damning, what will the cowards who sat and did nothing about the stolen election say now? The way our votes were taken away is a disgrace to our Nation. It must be fixed."

THEY THOUGHT WE’D NEVER FIND OUT. 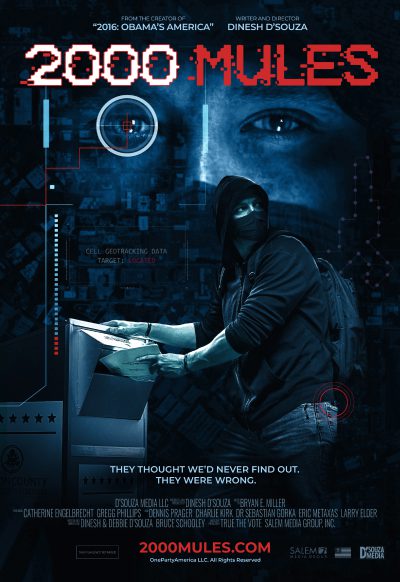 77% of Likely U.S. voters who have seen “2000 Mules” say the movie strengthened their conviction that there was systematic and widespread election fraud in the 2020 election.

Paul Bond, NEWSWEEK:
"After Joe Biden beat Donald Trump to become the nation's 46th president, the Department of Homeland Security declared that the 2020 election was "the most secure in American history." But conservative filmmaker Dinesh D'Souza is likely to set off a new firestorm with a documentary using video he says was obtained through open-records requests that allegedly shows "mules" stuffing ballot boxes."
Read article on Newsweek

Matt Boyle, BREITBART:
“Former President Donald Trump on Saturday evening played the trailer of the forthcoming explosive documentary “2000 Mules” which reveals a wide scale ballot trafficking network of ballot harvesters across several swing states. Trump played the trailer at the rally where he is campaigning with J.D. Vance, the candidate he endorsed for U.S. Senate in this year’s Ohio GOP Senate primary.”
Read article on Breitbart

GATEWAY PUNDIT:
“They thought we’d never find out. They were wrong.”
Read article on Gateway Pundit

Miranda Devine, NEW YORK POST:
“Now pesky evidence is starting to emerge of systematic schemes to subvert the electoral process — which must not be allowed to happen again if we are to restore faith in elections. The most compelling evidence to date has emerged in “2000 Mules,” the upcoming documentary by conservative filmmaker Dinesh D’Souza, who draws on research by election integrity group True The Vote to expose suspicious ballot harvesting.”
Read article on New York Post

Dinesh D'Souza's '2000 Mules': Ballot trafficking exposé has the evidence; can it get a hearing? Read article on Just The News

GET THE LATEST
UPDATES

No spam. Only the important stuff

You have been successfully subscribed

Research for this
movie is provided by
True The Vote

The cost would be $5/person, and all we'd ask is that you:

1. Purchase a DVD to use for your movie event/s. You can order from Amazon.com, Walmart.com or SalemNow.com Just have the DVD/s directly shipped to yourself for the event(s).

2. Keep track of how many people attend. If you’re not equipped to do an exact tally (for example if you’re at a very large venue), then a close estimate of attendees is fine.

Make check out to:
One Party America, LLC

In memo section of check:
Please write “License Fee,” the # of people that attended, and location of the screening (separate check for each event, please)
permission to screen movie